Phill is a Lecturer in Sport and Exercise Physiology and Coordinator of the University College’s on-site Sport Performance Centre working with UK and overseas coaches, athletes and support staff.

Phill has taught at AECC University College for five years and is a Sports Scientist. Growing up, Phill excelled in rugby but got injured when 18 years old. Still wanting to pursue a career in sport, he went on to study Sport and Exercise Science at University.

Phill has worked as a Sports Scientist and Physiologist in a wide range of sports. He has supported athletes undertaking ultra-marathons in the North Pole, helped Help for Heroes representatives prepare for climbing Kilimanjaro and worked with sit skiers to get them ready for the Paralympic games. 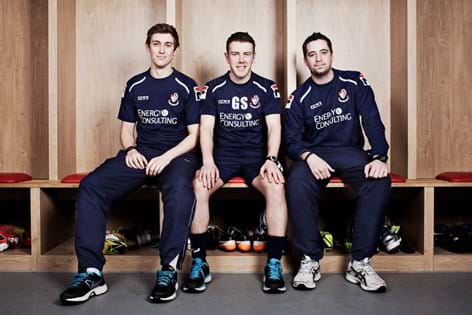 A Career as a Sports Scientist:

“Sports Science is not just about fitness, it’s a broad range of areas and we bring a range of expertise from clinical health care to high performance sport and everything in between.

“I love sport, simple as that. Put me in front of a sports documentary and I want to be involved. You can’t beat competition, and you definitely can’t beat the feeling of winning.

“Being a Sports Scientist can be very exciting. It’s very different to being an athlete. You aren’t at the centre of it all but you are involved in everything. I find being at the event and watching the athletes whizz by and achieve their goals to be as much of a buzz as I would doing it myself.

“As a Sports Scientist, your finishing line moment comes when you see the graph go up and cross over. You know that you’ve helped that athlete perform better than before.

“You can become an integral part of the support teams, whatever the person’s issue is, whether they are in hospital or working in a high-performance environment. This includes physiology, testing, programming, looking at data and analysing, video analysis and supporting with technique. You are also involved in the technology side which often results in quite in-depth analysis.”

“One of my first jobs was working with AFC Bournemouth as a Performance Analyst. I analysed the way the team and others were playing and selected players to be recruited based on this insight.

“I spent hundreds of hours watching videos and creating a program to track all the data. In the manager’s office, there would be print-outs of all the players’ data on the wall. My analysis would help the club decide whether to buy a player or not.

“It was a great job. You get used to watching football games in double speed. The strangest thing was when a player comes in after being signed and you feel like you know him, as you’ve spent the last few months analysing his every move on camera. But to him, you’re a complete stranger!”

“I’m currently researching respiratory function in sit skiers, as well as undertaking health screenings with the Dorset Police. There are some really interesting outcomes and we will be able to provide advice on how to provide support for their officers and reduce strain. These projects give us great insight.

“We also work with Bournemouth Collegiate School and their athletes in academies, providing some of their best athletes with sport science support. They have a lot of impressive athletes, and some are potential Olympians so its great to be able to support them in their journey.”

“I came to AECC as a Lecturer for Clinical Exercise Science. During my time here I have supported AFC Bournemouth players who come to our Sport Performance Centre for rehab.

“I’ve worked with Redbull Racing Formula One pit crews to analyse their physical roles and risks for their musculoskeletal health at AECC. I’ve also had the pleasure of working with the Armed Forces Para-Snowsport Team (AFPST) Charity in conjunction with GB Para-Nordic Skiing.

“Students can get involved with these partnerships, whether its observing or getting involved with testing the athletes, which is great experience. At AECC we have a big focus on applied, which I really enjoy.

“You can pull so much data and learning from these applied exercises and it’s so useful for research. We have a strong balance between teaching, applied and research work which is not only refreshing but gives a great experience for our students.”

Find out more about careers available to you after completing study in our subject areas of sport, exercise and health science, and psychology. Visit Future careers.