Dr Brown has long been an influential and well-respected member of the global Chiropractic community, and has been serving as Secretary-General of the World Federation of Chiropractic since 2015.

Dr Brown also served as President of the British Chiropractic Association between 2009 and 2013. Between 2009 and 2015, he held roles within the European Chiropractors’ Union, becoming its first Secretary-General in 2013. He was awarded a fellowship by AECC University College in 2017.

Dr Brown graduated from AECC UC (then known as the Anglo-European College of Chiropractic) in 1990 and worked in private practice as a Chiropractor for 25 years. Since taking up the office of WFC Secretary-General, he has split his time between the UK and the WFC’s head office in Toronto, Canada.

As a clinician, Dr Brown was the owner and Clinic Director of a large interdisciplinary clinic in Stroud, Gloucestershire.  During his time in practice, he worked extensively in professional sport, including the English Premier League, elite athletics and Moto-GP motor sport, and was part of the London 2012 Olympic medical services team. With a Master of Laws degree from Cardiff University, Dr Brown has extensive experience as an expert witness and speaks nationally and internationally on matters relating to professional standards.

In his role as Visiting Professor, Dr Brown will be working with the School of Chiropractic to help inspire the next generation of chiropractors. He will also be acting in an advisory capacity to the Vice-Chancellor and Executive Team to support AECC UC in the delivery and implementation of our new Strategic Plan.

Vice-Chancellor of AECC University College, Professor Lesley Haig, commented: “Dr Brown’s appointment is a really exciting one for the University College. Our students can learn a huge amount from the work he has done to lead the profession throughout his varied career in Chiropractic. I know he will inspire our community.”

Speaking after his appointment, Dr Brown said: “I am honoured and delighted to have this award bestowed on me and to have the opportunity to work with AECC University College. I have witnessed tremendous growth and development of the institution over the past four decades, but believe that the current advances are creating unprecedented opportunities. I look forward to serving my alma mater in this new capacity.”

You can read more about Dr Richard Brown here. 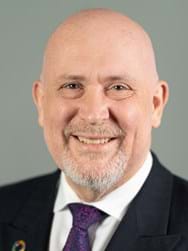