Ryan Grimshaw (Mktg) Friday, October 03, 2014
On Thursday 13th March, Dr Neil Osborne, Director of Clinic at the AECC and four senior student interns eagerly accepted an invitation to visit The World Health Organisation (WHO) in Geneva. The invitation invited the group to contribute to some initiatives that they are running and learn about some of the work they do within the organisation. 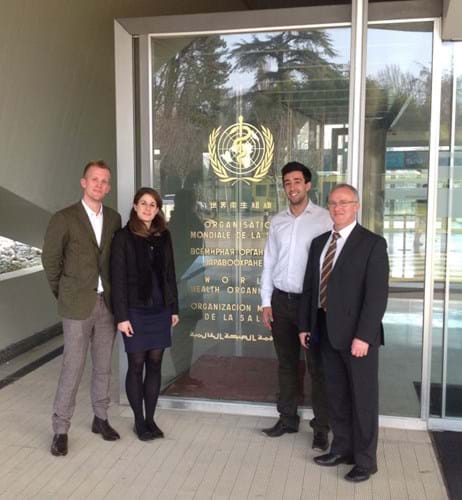 The day kicked off with a tour of the WHO Campus, followed by a talk from various members of staff including a fascinating discussion with Alano Officer, the main author of the first ever International Disability Report. The group then met some WHO Interns who outlined the exciting contributions that students and new graduates could give in WHO work, something that has been extended to the Chiropractic profession in recent years primarily due to the outstanding contribution of Dr Robinson Nichol (a former intern and a Doctor of Chiropractic). During the day the group also discussed the possibility of securing AECC placements at WHO, and learnt that any fortunate candidates could become involved in WHO work in Geneva – an amazing opportunity for any AECC student.
The trip wasn’t just an opportunity to visit and find out more about the organisation, the WHO had also asked the AECC to collect some important data for them, which resulted in a unique opportunity to collaborate with the organisation. The AECC has a strong track-record in the collection of self-report data – allowing patients to report their pain and anxiety levels. With the Bournemouth Questionnaire, developed at AECC, the clinic now engages with Care Response, an excellent way of collecting and summarising presentations and outcomes of patient treatment. There are very few institutions collecting such information for WHO, and the AECC were proud to be invited to do so. If the college are able to achieve this, they will be only the second in the UK to do so, and with 50,000 patient visits per year, have the potential to become a leading collaborating institution for WHO in musculoskeletal pain and disability. There is a challenge ahead but one staff and students are eager to get started with. Watch this space!