Many of you will be following Radio One’s Greg James, who has been for the past few days battling against the elements in his challenge, labelled Radio 1’s Gregathlon: Pedal To The Peaks. (Image: Ed Smith/Comic Relief)

This test of endurance is all for Sport Relief and will see Greg James cycling hundreds of miles in five days and climbing up three of the UK's highest mountains: Mount Snowdon, followed by Scafell Pike, and finally the mighty Ben Nevis. Sport Relief trainer Greg Whyte said it was the “worst weather” ever experienced on a Sport Relief challenge.

Back here at AECC University College, we have our very own cycling hero who is preparing for a challenge of no mean feat. Phill Heritage, Lecturer in Exercise Science, is in full training for his 1242km cycle which he will complete in 7 days, raising money for British Heart Foundation (BHF). 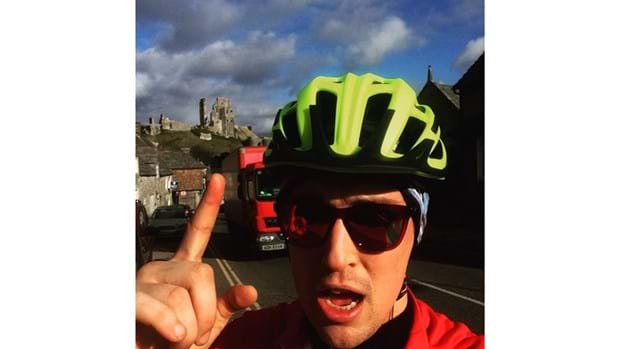 Phill and his family have regularly raised money for BHF to fund more research into conditions and identifying treatments, genetic links and cures and his story is a personal one. Phill is one of those 7 million people fighting cardiovascular disease, as is his father and others in his family, fighting a daily battle with hypertension.

Phill’s remarkable and challenging cycle ride stems from the BHF research which helped doctors to keep his brother alive after being born with a variety of heart defects in 1985. Having been given days to live, Phill’s brother survived and is now a 32 year old Cambridge graduate and Lt-Cdr in the Royal Navy.

As a keen athlete and as an expert in exercise science, Phill has worked on a number of endurance events and decided that now was his time to put his own body through the exertion of training and a gruelling event. Cycling from Bournemouth to Glasgow, Phill will cover an impressive 1242km taking in the sights of Worcester and Aberystwyth, then heading north for the mountains and Bangor before setting his sights on Liverpool, then up to Edinburgh before finishing in Glasgow 7 days later. Our Lecturer in Exercise Science chose Glasgow because it had the highest incidence of cardiac deaths both over and under the age of 75.

AECC University College is fully supportive of Phill’s brave and inspiring challenge and we wish him well in his training and for the event which will take place in April.

Please do donate where possible to help him achieve his fundraising target: https://www.justgiving.com/fundraising/1242