Lecturer in Sport and Exercise Physiology at AECC University College, Phill Heritage, has been working with the Armed Forces Para Snowsport Team (AFPST) to support their Para Nordic skiers for the past two years.

AECC University College was approached by the team to become their Official Sport Science Partner two years ago. Phill has worked closely with the team since then, helping amputee athletes to achieve their potential in international competitions.

The team benefits not only from Phill’s expertise, but also from the state-of-the-art Human Performance Laboratory located on campus here at the University College.

“Nordic skiing includes biathlon (ski and shoot) and cross-country skiing. When we started working with them the AFPST team had five sitting athletes (who compete strapped to sledges), as well as two standing athletes who are able to compete standing but have disabilities that prevent them competing with able-bodied equivalents.

“In our first year with AFPST, I travelled extensively to camps and competitions with the team to develop an understanding of the physiological and biomechanical demands of the sport. During this time, I began to develop a testing, monitoring and training outline for the team as they began preparing for the next Winter Paralympic Games in Beijing 2022.”

“I have worked with veterans in the past as a consultant on an extreme challenge and also come from a long line of veterans. I actually hoped to serve myself after university (my brother continued the tradition instead). I have also always had an interest in more peripheral, unusual sports and so when the opportunity was presented by AFPST I jumped at the chance.

“This opportunity moved my research focus to an area of greater potential impact. The feeling of watching people who were once able-bodied regain a competitive spirit and meaning through sport is simply inspirational.

“However, I quickly learned that the support role on a camp with amputee athletes has a few more responsibilities than an able-bodied camp. You quickly learn how to prepare a ski sledge, attach and detach skis, repair sledges, carry people’s legs off the track, carry supplies, assemble wheelchairs, and help maintain sores and injuries.

“You also have to quickly learn the differences in movement, mobility and balance in everyday life for the athletes as well as simple things like the terminology you should and shouldn’t use when referring to people’s differences. It can be a humbling experience and you have to be able to read a room, know when to ask questions and assume nothing.”

“This year saw my role evolve as the team was able to take on a full-time physiologist, Dr Dave Macutkiewicz, as part of their new position within GB Snowsports. Dave has spent the last year implementing the testing and training programmes, while I have supported with development and testing in our Human Performance Laboratory located on-site at the University College.

“Regular testing means the athletes can follow contemporary training programmes that are always evolving. This ensures continuous physiological development, backed up by impressive results in the laboratory. We have also been conducting an in-depth needs assessment on the sport which lacks the amount of research support that most sports have.” 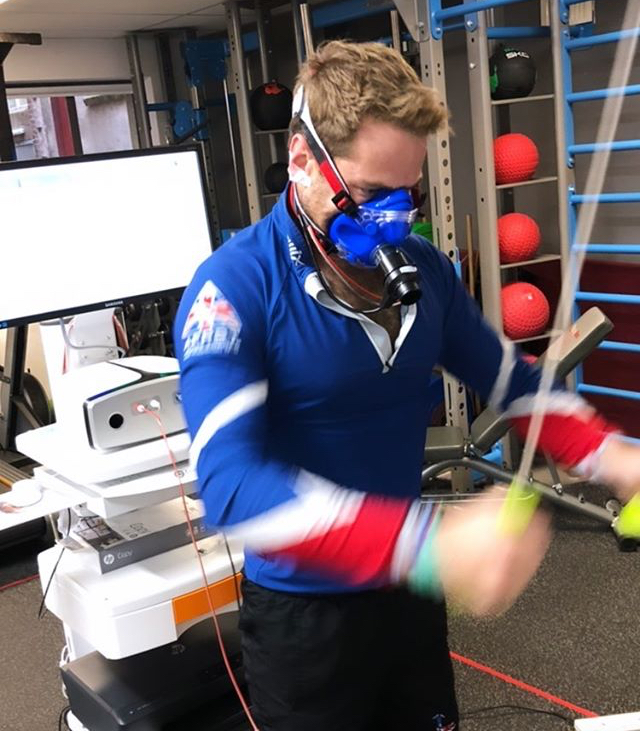 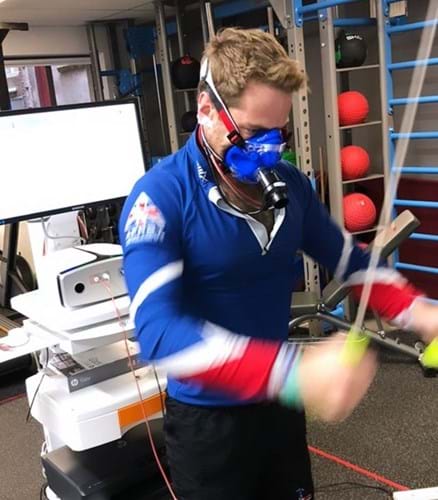 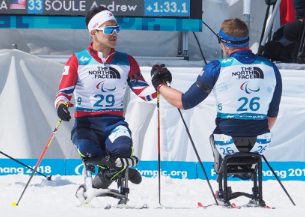 Competing on the Edge of Physiological Capacity

“During this period, I have identified a new research theme that I have been working on for the last six months and will continue to work on into the future. There are a variety of questions we have about the physiological responses of amputees in sit Nordic skiing.

“We have data that tells us that these athletes compete on the edge of their physiological capacity for up to an hour at a time. Relatively they work as hard as a sprinter for 360 times longer! It can be difficult to collect general performance data on amputees as the leading cause of amputation are long-term diseases, such as diabetes and peripheral artery disease.

“Therefore, we need to collect data on able-bodied participants in sit-skis before checking the results against a selection of amputee athletes. Why does this matter? Because it gives us an opportunity to compare the physiological responses of able-bodied people and amputees.”

The Impact of COVID-19

“COVID-19 has had a profound effect on all sport, and para Nordic is no exception. As a result of the international lockdown, the final competition of the season was cancelled and laboratories across the country have closed.

“This has impacted the pre-season element of the athlete’s training, the most important period for developing aerobic fitness and focussing on fitness markers over technique.

“During this time, the athletes’ training has been manipulated using heart rate and training power data rather than laboratory results. Despite the difficulties the athletes have continued to demonstrate impressive performance improvements, though these need to be validated by laboratory testing – there’s no substitute for the gold standard tests!"