Researchers at AECC University College have released exciting findings about the perceived link between disc degeneration and low back pain in a study funded by the Radiological Research Trust and ASG Superconductors.

For many years there has been uncertainty about this link. An established theory was that when discs begin to degenerate, this loosens the linkages between the spinal segments causing instability.

This, in turn was thought to cause pain.  However, new research from AECC University College’s Centre for Biomechanics Research has found that this is very unlikely to be true.

The study tested 40 lumbar discs in older people without back pain for instability and disc degeneration. The study found no relationship between disc degeneration and any kind of segmental motion despite rigorous testing using the AECC University College’s Open Upright MRI scanner and motion X-ray systems.

Participants underwent MRI and Quantitative Fluoroscopy (QF) scans: both done lying down and standing up. The MRI scans measured disc degeneration and the QF scan measured motion between the vertebrae of participants’ spines.

Instead, the study found that it was not so much the structure, but the integrated function of the spine that keeps us free from low back pain.

Commenting on the findings, Professor Alan Breen said: “Until now, we were taught that early disc degeneration causes instability between the vertebrae but there was not conclusive evidence for this.

“This study is really exciting, because it conclusively shows that it doesn’t happen at all in people without back pain who have disc degeneration. The next step will be to find out if it happens in people with back pain.

“The impact of this research is that medical professionals such as chiropractors, physiotherapists, spinal surgeons, rheumatologists, GPs and osteopaths don’t have to worry that patients with early disc degeneration will be likely to have unstable backs.

“The study was carried out entirely on campus at the Centre for Biomechanics Research, thanks to the state-of-the-art equipment we have on campus at AECC University College. We have one of the only Open Upright MRI scanners in the country and our expertise in Quantitative Fluoroscopy means we are extremely well placed to carry out research like this.”

You can read the full paper here.

For further reading, you can read an earlier paper submitted by the research team and featured in Orthopaedics Weekly here. 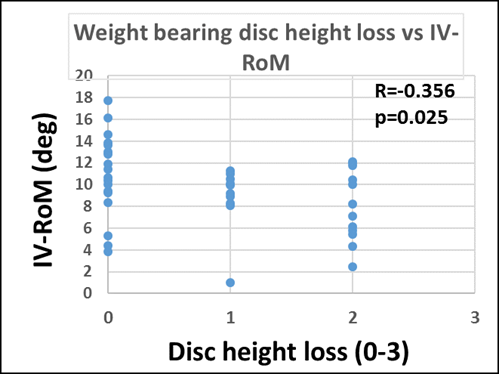