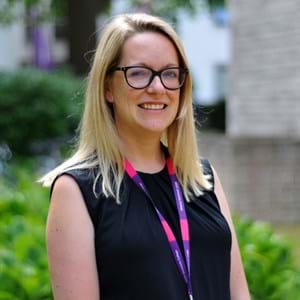 Zöe is a Senior Lecturer in Psychology within the School of Psychology, Sport and Physical Activity. She is a Chartered Psychologist specialising in visual performance in elite athletes – and area in which she has been working for over a decade.

Zöe has worked with many Olympic and professional athletes to help them improve their performance by improving their perceptual capabilities. The athletes she works with have gone on to win Olympic medals, World and European championships, as well as set many personal best achievements.
Since completing her PhD, Zöe has continued to carry out research as well as presenting at many conferences and coach education workshops.

As a Senior Lecturer in Psychology, Zöe is course leader for our BSc (Hons) Psychology and BSc (Hons) Sport and Exercise Psychology course. She is a sports vision coach currently consulting with elite athletes from a range of sports including football, rugby, golf and motor racing. Zöe is also an active researcher with ongoing projects in the areas of eye tracking in sport, concussion management, and improving performance by training the visual system.

When teaching, Zöe enjoys the cognitive and biological aspects of psychology, particularly when applied in a sporting context. For her own research she is interested in vision in elite athletes, using eye tracking to enhance information uptake, prevention and management of concussion through cognitive and visual measures, and cognitive factors related to elite sports performance.

Wimshurst, Z. L. June 2014. Suarez’s killer instincts on the pitch are in his visual skills too. The Conversation.

Wimshurst, Z. L. July 2014. When it comes to penalties, the eyes are the window to the goal. The Conversation.